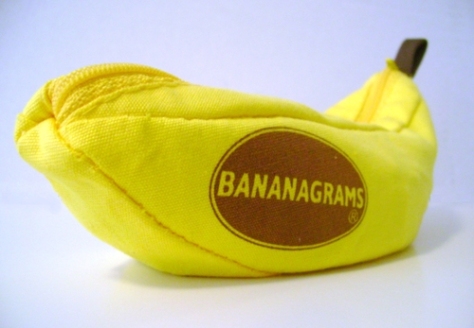 There is a long list of word-tile games, the most well-known being Scrabble, and it seems like every year another one or two or seven come out. Bananagrams (Bananagrams, 2006), in terms of how it’s played, is not really unique – you use the tiles to spell words and try to be the first player to run out of tiles once the main draw pile is exhausted. But, in addition to the game play, they did this word game right in every way.

Most people, gamers or not, have noticed the packaging by now from browsing through a Barnes and Noble, Borders, or Target; the packaging, a heavy cloth banana-shaped bag,  is cute. No, not cute, clever. Wait, clever doesn’t really sum it up – the packaging is brilliant in its simplicity and the banana-anagram pun is genius. It’s a gimmick, but it works. The fact that the game inside that gimmicky packaging works well really just secures its position as an excellent game. The tiles are heavy and feel good in your hand, and the entire package itself costs $14.95. You get a time-tested and easy to understand game, made with quality material that feels good in your hands, in a conversation-piece of a package that appeals to all ages, and you can travel with it. 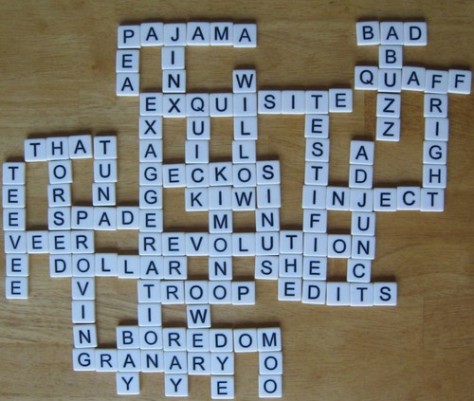 All the word tile games that are out there involve drawing and discarding tiles and spelling words, usually in a crossword-type fashion, and so does Bananagrams. Each player starts with a certain number of tiles, and begins making words in front of them; all players play on their own word grid simultaneously. Players may (actually, must) rearrange their words as they go in an attempt to fit in all of the tiles they have drawn. Once they have used up all of their tiles, they draw another (and forcing other players to also draw another). If they can’t use a tile, they may cash it in in exchange for two more. The game continues until the draw pile is exhausted and one player has used all of his or her own tiles to make legal words. 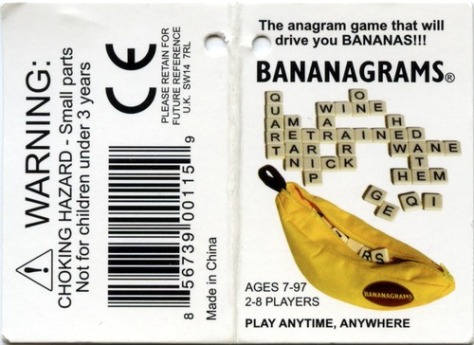 The rules are simple enough for youngsters (my 5-year old can play), but the universal appeal of crosswords makes the game truly suitable for any age. It even comes with rules for a solitaire game. I recommend Bananagrams for just about any household – and not just word lovers! This is a great game – as mentioned earlier – for traveling, and just like a pack of playing cards different rules can be introduced to make it easier or more difficult. At $14.95 it’s hard to imagine a better value.

Note: Double-Bananagrams is now available, as well as a companion game – appletters.