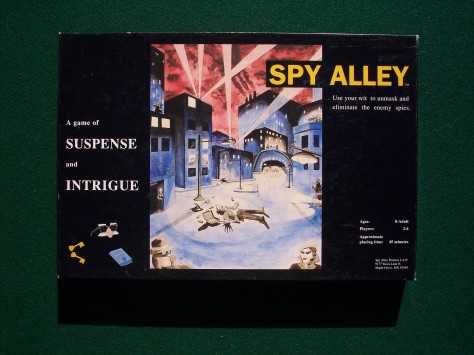 If your kids (8 and older) are starting to act like they’re pretty clever, then Spy Alley (Spy Alley Partners, 1992) is an excellent way to challenge them, to see if they can outwit you. It is a simple game, but for such a simple game it is remarkably well-balanced, and it is just as complicated as the players themselves make it.

In Spy Alley, each player secretly takes on the identity of one of six spies: American, English, French, German, Russian, or Italian. The goal of the game is very simply to be the first to acquire the four items that each spy needs (password, disguise, codebook,  and key), make it back to their own embassy on the board, and reveal their identity. It is almost as easy as it sounds, but here’s the rub: if another player can accurately identify your nationality, then you are out of the game. Here’s a further rub, one which really complicates things: a player who misidentifies another player is out of the game. 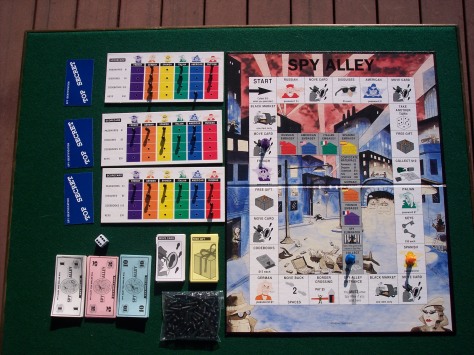 The really unique part of Spy Alley is the pegboard that serves to collect each “item” (see below). As players circle the board, they have the opportunity to purchase different items, which are represented by black pegs inserted into corresponding holes in the appropriate spy column. To win, a player must have each item under his or her own nationality represented with black pegs. But if other players guess at the identity correctly, that player is eliminated. Therefore, bluffing is an a critical part of the game’s strategy. It is accomplished by purchasing objects and placing their pegs in the columns of different spies, leaving the other players to guess at one’s actual identity. 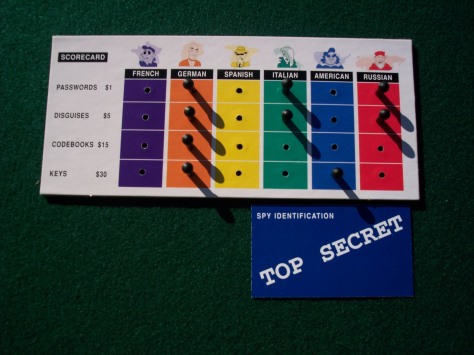 Players take turns rolling the dice, or else playing a “move” card, in order to circle the board and accumulate money and spy items. Once they have collected all of their items, they are free to move through “Spy Alley” and try to land on their embassy in order to reveal themselves and thus win the game. There are spots on the board where players win money, or free items, or “move” cards, and one where players may guess at another player’s identity without the risk of being eliminated. Play moves fast, and something could happen on every turn, so there isn’t a lot of waiting around in Spy Alley. 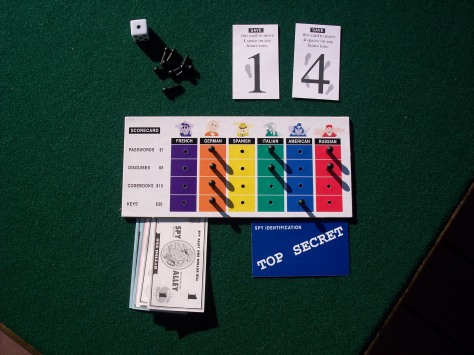 The best part of the game is obviously the bluffing, and it’s remarkable how much that levels the playing field between kids and parents, or older and younger kids. Games do not last too long, and those that do are fun enough to watch because of their excitement. I can only remember one game where a player actually bought items for only his spy, and then proceeded directly to the embassy to win. The rest of us were sure he was bluffing, and by the time we decided to put an end to it, it was too late. he made it to his embassy and the game was over.

I definitely recommend this game to anyone with kids 7 or over. The best thing about it is how it automatically scales itself to the audience, and everyone has a reasonably good chance to win. Adults don’t have to dumb down too much to allow the kids to compete – and that’s worth a lot on family game night.