If you’re an American or anyone else familiar with Dan Brown’s novels, then please understand that this game is not what you think it is! Players are actually trying to create a “world” populated with the world’s greatest thinkers, as represented on cards.

Opus Dei: Existence After Religion (Dema Games, 2008) is so named because that opening phrase, literally translated, is “Work of God.” It has nothing to do with the catholic “Prelatura del Opus Dei” – the dark figures in at least one of Brown’s novels, although they (the PdOD) are suing for trademark infringement.

So, legal questions aside, what about this game? If you have played Guillotine before, then you know how to play Opus Dei (go to https://gamesbyjohnny.wordpress.com/2009/10/28/guillotine/ if you don’t know it yet); it’s that similar, right down to the stand-up cardboard easel (see pic below). There are three “rounds” of play (each round is one year), most of which involves making changes to the lineup of great thinkers, as well as a lot of player interaction. But I think it’s a mistake to dismiss it as a “rip off,” because the theme, which is so important in Guillotine, is also of critical importance in this game. 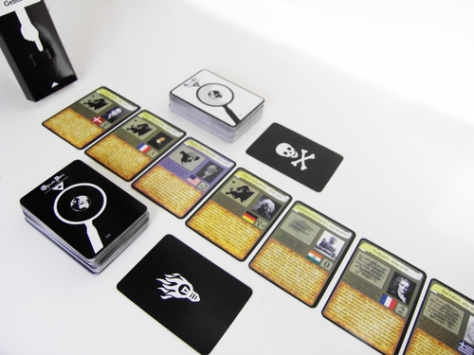 In Guillotine, players are rival executioners, vying to collect the heads of nobles and other public figures whose heads (that is, the cards representing their heads) are worth varying points. The nobles are lined up next to the cardboard “guillotine,” and whichever card is next in line is taken by the player whose turn has just ended. Action cards are used during that turn to manipulate the nobles in line, force a card swap with another player, or do any number of other things. There is a dark humor to Guillotine that adds to its play appeal, but Opus Dei turns that on its head.

In Opus Dei, the players are referred to as “zeitgeists” (literally, the “spirit of the time”), who are tasked with creating a world based on reason and rationality, so they vie for scientists and philosophers (whose corresponding cards are worth varying points). Rather than depicted figures losing their heads when they are next in line, these great thinkers are actually going from “potential” existence to “actual” existence by being incorporated into the world of the zeitgeist. Action cards are also played, and have similar effects as those in Guillotine.

Dema Games, on their web site, refer to Opus Dei as the first Atheist card game. To that end, one major feature is that strictly religious figures – referred to as “fools” cards – are worth negative points, so if they end up in a player’s world they take away points. Some figures thus depicted are Ruhollah Khomeini (the Ayatollah), Sun Myung Moon, and Joseph Smith Jr. The creators of the game make it clear that the great thinkers are champions of reason and logic, and enemies of dogma. Thus, to the extent that a great historical figure is dogmatic, they are branded as fools in this game. 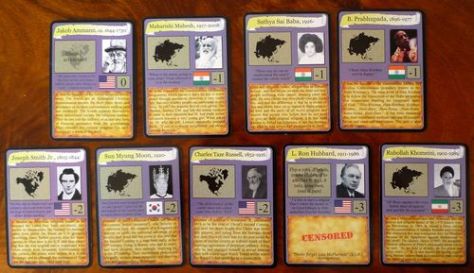 So how different is it from Guillotine, really? The game play is almost identical. Players play action cards, try to manipulate other cards to their advantage, and at the end of that round whichever card is nearest the easel goes to that player’s world. Point values for the cards are even identical (except see the Einstein card, above). But the beauty of Opus Dei is that it is using the very popular and fun Guillotine game mechanic as a platform for a far more interesting theme. The cards depict actual philosophers and scientists, as well as some dogmatic “fools” whose cards are worth negative points (The Reverend Moon, L Ron Hubbard, etc).

The cards are very well done, richly illustrated, and good quality; they include a brief sketch of the  famous thinker’s life and ideas, a portrait, that person’s national flag, and, in some cases, further directions that the player must follow upon receiving the card. Some of the action cards have an effect that is global (all players are affected; these cards stand in the easel), some affect only individual players, and some only have an effect during the current turn.

My first impression of this game was probably the same as so many who think that Dan Brown’s novels have oversaturated the market – I was not looking forward to it. But then I saw the cards, and then looked closer at the theme, and I had to give it a try. I’m glad I did! I have always been a “wannabe” philosopher; it’s those big questions in life that really get me going, and I have always been in awe of the great thinkers that have wrestled, with some success, with those questions in order to give the rest of the world direction and progress.

This is just a game, but it’s a lovely little tour through western intellectual history. One might quibble with (or be aghast at) the manufacturer’s value assignment on some thinkers (How does Hegel get 5, when Hobbes, Locke, and Rousseau are each only worth 3??!!), and there are very few thinkers from the eastern tradition (Confucius, Laozi, and Zarathustra; also Siddartha Gautama – the Buddha – who is worth 0 points; neither positive nor negative). But the value assignment itself leads to an interesting discussion for those with an opinion on the subject, so that is satisfying as well.

All told, I like this game a lot because I have not seen anything like it before and I love the theme, plus it is a nice introduction to the western intellectual tradition. How can that not be a good thing!? As far as game play goes, it is safe to say that since it duplicates Guillotine, it’s a lot of fun as long as you don’t need the comic humor.

I would recommend it to anyone 15 years old and up – it would be a great gift for any thoughtful kid who is first thinking about the deep questions in life, and his or her place in the great big world or in human history. There are obviously going to be people who see it as a condescending attack on their religious beliefs, so this would not be a welcome gift for them. Too bad, I think, because it’s one of those rare games that can teach interesting facts and make you think without taking away from the fun of the game itself.