In 1993, Wizards of the Coast published the very first Collectible Card Game (CCG), Magic: The Gathering. The CCG genre became a huge success, and has since then spawned a few of the most economically successful games on the market with Pokemon and Yu-Gi-Oh!

In terms of game play, the CCG was entirely unique – even revolutionary. Instead of a game being self-contained in a box, the CCG allows players to acquire individual elements in smaller quantities, via “booster packs,” until they have a stockpile. Players then choose cards from their stockpile to create a “deck” (or “library”); it’s the deck that is used in a match, which itself is the equivalent of a single game. Other cards owned by the player are not in the game, and cannot be brought into it. Thus, participating in Magic: The Gathering (MTG) is  a little like owning a sports franchise in the sense that a player is able to draw from their “roster” (stockpile) to put together a desirable “lineup” (their deck) for any particular match.

CCG’s use a basic rule structure and a large assortment of cards which each have characteristics that contradict or supplement the basic rules. Each player predetermines their own strategy by creating a particular deck. The rules define parameters, such as how many cards may be used, how many copies of a given card are allowed, order of play, etc. Matches are typically two-player face-offs, in which each player begins with a number of “life units” and the goal is to take those units away from the opponent before they do the same to you.

In MTG, players essentially play the role of powerful sorcerers, each trying to destroy the other. As sorcerers, they call upon different land types for magical energy (“mana”) which allows them to cast different spells. The five land types are associated with five colors: swamp – black; water – blue; plains – white; mountains – red; forest – green (see pics below). Each non-land  card (with some important exceptions) is also one of these colors or a mix of them, and exhibits effects aligned with the land-type from which it came. Mountains, for example, are associated with strength and fire, so there are many giants and fire spells that are red.

The spells are many and varied, but there are a few major categories, and any given spell has a “casting cost,” which is how much mana it takes to use that spell. Creatures may be summoned, which are then used to do battle with the opposing player or opposing creatures; every creature has an attack/defense rating, and the comparisons of attack/defense ratings, plus modifiers, determines the outcome of creature vs creature battles. An enchantment might be cast on a player, on a creature, or on a special item, such as an artifact, which itself must be summoned. The enchantment might add or detract from the attack/defense rating, or it might totally incapacitate a certain kind of opposing card. An Instant spell is one that has an immediate effect, such as sorcery, which modifies other cards or processes already in play. 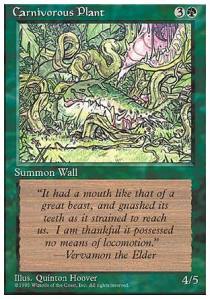 Players begin with a hand of seven cards, draw one from their library (the deck they had prepared and then shuffled), and are free to play whatever they can. A player must lay down land cards in order to use any spells, and once land cards are down players can execute whatever strategy they prepared for when choosing the construction of their deck. As creatures are summoned and the various spells are cast, players lose life points (each begins the game with 20); When a player has reached zero life points, they lose  the match. 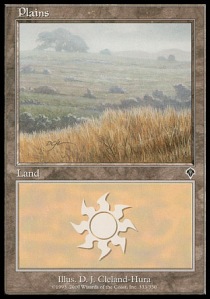 MTG is a fascinating game, especially if you have a true appreciation for layered strategies and contingency planning in games. There are so many different cards in existence that rarely do two different people ever have even similar self-created decks. What makes it more interesting, and what has arguably made Wizards of the Coast a relative overnight success, is that booster packs of new MTG cards contain a fixed number of cards, and usually include one “rare” card, some “uncommon” cards, and many “common” cards. Rare cards are generally more powerful or efficient than uncommons or commons. This fact has resulted in a massive secondary market for collectors and certain other MTG enthusiasts, not dissimilar to the lucrative collectible baseball card market.

This game, while its basic mechanic is remarkable and interesting, is not for everyone. The fantasy theme can be overwhelming, to the extent that die-hard, committed gamers who do not like fantasy will not play it despite their knowledge that game play is so interesting. It is also a game that is not fun when investment has been small;  one problem of the CCG concept is that the person who has spent the most money on cards wins, due simply to their larger stockpile. One can’t “dabble” in MTG and expect to win any games without an equally unadvanced partner.

I do recommend the game to teens and older who show an interest in strategy games, an interest in fantasy or (because of the often incredible card art) graphic novels, or those who have played similar games in the past. Pokemon and Yu-gi-Oh! players would take a very natural next step up to MTG because the game play is similar, but there are so very many ways to build a deck and execute it during play that it would not be good for the younger players.

Sometimes the theme of a game seems totally arbitrary; the theme does nothing to guide, instruct, or illuminate game play. Guillotine (Wizards of the Coast, 1998), however, is not one of those games; the game play fits precisely with the theme, and does so in a humorous, fun, and slightly bawdy way.

In Guillotine, players are rival executioners in revolutionary France vying for heads. Heads vary in terms of point value, and some heads are more valuable if they are collected along with particular other heads.

There are three rounds, each representing a day of executions, in which 12 “nobles” (see pics below) are lined up for execution, beginning at a cardboard gallows. Players have a hand of “Action” cards, and are free to play one at the beginning of each turn. Action cards can do many things, such as rearrange the lineup, pull nobles out of the lineup, add nobles to it, allow the player to steal or swap a head from another basket, etc. After they have played the action card or passed, they then collect whatever noble is next in line for execution, and then draw another action card. 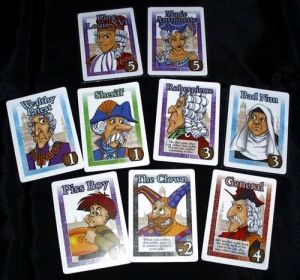 It’s the use of action cards that make the game so much fun; since heads that have been collected are on public display, face up in front of each executioner, all players can gauge each others’ worth and play action cards with that in mind.

This is a fun and relatively quick game, and it’s small enough to travel with. It’s recommended for ages 12 and up, but if the sometime risque humor is not an issue (chances are it’s too subtle to be easily noticed), it can be played by ages 8 and over. The humor makes it a great ice breaker, where players may not know each other well, and I recommend it for light-gaming situations, or perhaps as a pastime when waiting for some bigger event.