Railroad games are just plain fun. There have been a number of them published, and some have enjoyed a cult-like status for a number of years (see my review of Empire Builder, for example). But none have been as popular as Ticket to Ride (Days of Wonder, 2004), which has been on the short list of best games since it came out. It is considered one of a few “gateway” games – that is, a mildly complex game that is so very fun and addictive that “new” gamers will want to try other, more complex games. 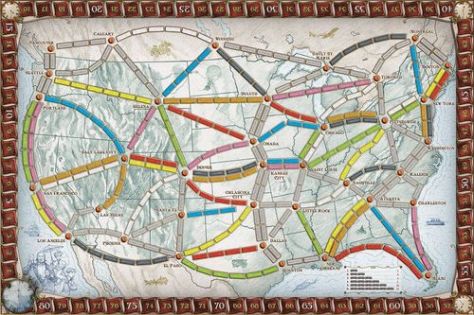 The Ticket to Ride board is a map (the original version is the USA, but there are a number of other versions available) denoting major cities, interconnected with train routes of various colors. There are two stacks of cards: Destination cards depict two cities (which players would need to connect with a continuous train route) as well as a point value for connecting them (see below); Ticket cards depict a train car of a certain color, which corresponds to certain routes on the map board – or they might be multi-color “wild” cards (farther below!).

Players each have a stack of 45 trains in their own color,and they start the game with five ticket cards. They draw three destination cards and can keep either two or three of them – but the ones they keep are routes that they must complete with continuous tracks of their own color. If the routes are completed, the player gets the points; if they are not completed by the end of the game, the player loses those points.

The game consists of players taking turns drawing new tickets, drawing new destinations, or placing train routes. In order to place a train route, a player must have enough of the correctly colored tickets, and turn them in. A multi-color wild card is good for any color ticket. Each route is a certain color, or gray, and a certain number of train links long. For example, El Paso to Houston is six links long, and green, so a player would have to accumulate a combination of six green or wild cards and then turn them in – then he or she would be able to put six of their own color trains on those six links. Note that some routes are double wide, so two different players can occupy parallel tracks between the same destinations.

Points are scored throughout the game by placing routes – and the value of the routes increases non-linearly, so that one track piece earns you one point, but 6 track pieces earns you 20 points. Points are also awarded at the end of the game. Players who achieved their destination goals are awarded the corresponding number of points (more points for longer tracks), and those who failed to do so are penalized the same number of points. 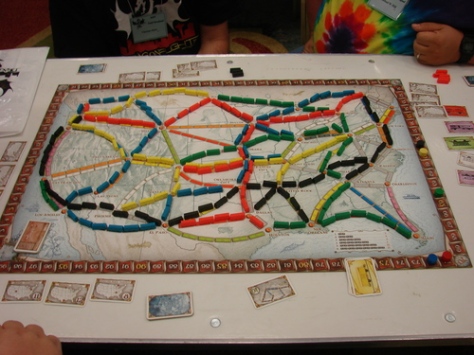 During a game of Ticket to Ride, 5 cards available to be drawn are kept face up, and on a turn a player may draw two of the visible cards, unless it is a wild card, in which case it is the only card that can be drawn. If there are no colors the player wants, he or she can draw from a face-down pile once or twice (they can also draw one card here, and the next from the face up stack, again with the exception of the wild card. A player might also draw more Destination cards in an effort to bulk up their score. This mechanism of a constantly changing card availability makes the game more exciting than if they had been face down, plus it gives the alert player information about the plans of his or her opponents.

While it is “another train game,” this is one train game that has gotten a lot of people hooked. It’s complex enough to be rewarding, but simple enough to learn in 5 minutes. I recommend it for any map or train game enthusiast, of for any gamer who wants to expand their social gaming circle. It is good for families, groups, and just a bunch of friends. But be ready to accommodate more hungry zombies….

Buy Ticket to Ride at Amazon!

3 thoughts on “Ticket to Ride”