I waited far too long to play 221B Baker Street (John N. Hansen Co, 1975). It has been considered a classic since I first heard of it in the 1980’s, but I never had the opportunity to play until this past weekend (November 2009), 34 years after its first publication. And I call myself a “game lover.” For shame!

The game itself is, predictably, based on actual Sherlock Holmes mysteries by Sir Arthur Conan Doyle. Players read a mystery and are given several aspects of the crime to solve. To solve the mystery, however, players must move their pawns from 221B Baker Street on the corner of the London-based map board to various locations throughout the board, in order to collect clues.

The clues are cleverly indexed on the backs of the mystery cards, and the indexes refer to corresponding numbers in the rules book. For example, if I move my pawn into, say, The Boar’s Head Inn on the board, I would look at the back of the card and find the number listed next to “The Boar’s Head Inn.” I would then look up that number in the rules book, and that is where the clue itself is listed. (see examples below) The clues that are given vary in difficulty, and typically give only one part of one of the answers sought. Sometimes the clue given is “No clue at this location,” in which case no information is gained. 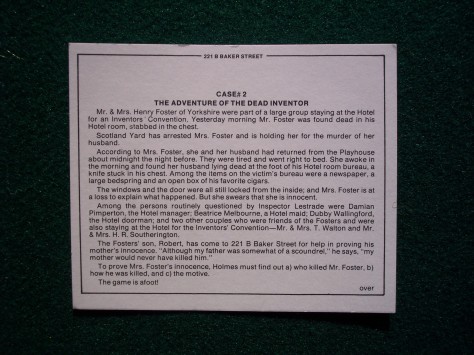 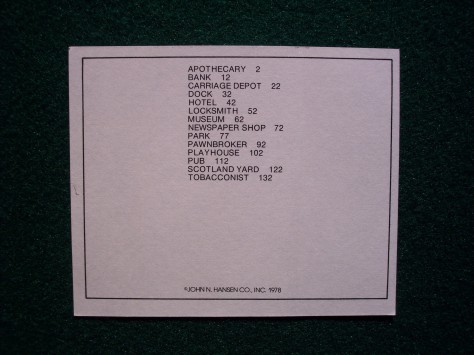 It is possible to solve the mystery before all clues are found – in fact with a group of adults it is likely that the mystery will be solved before all clues are found. That’s because the clues provide parts of the answers, and given enough parts it is often easy to infer the others. Once a final clue is given, the ultimate answer is only slightly hidden through rhyming or wordplay. Since there are usually three parts to the mystery (in above example, who committed the crime, how it was committed, and why) it takes at least a little while to gather enough clues to even make a guess.

This game has a scavenger-hunt type of feel to it that makes it fun, but it is essentially a race around the board to find enough clues to get something close to the final answer in order to guess it correctly. The rules encourage players, however, to look in places that would makes sense, including the area of the crime scene, potential neighbors, etc. Doing that did not make a big difference in the game I played, though, so it’s an open question whether that makes sense as a strategy over time. There is some strategy (based on efficiently covering the board) in determining one’s path, but the roll of the die determines how far one moves, so the effects of both are largely washed out.

I recommend 221B Baker Street to younger gamers who might be more challenged by what proved to be relatively simple final clues. A very bright youngster of 8 or more, and more typically teens and young adults should find this game a lot of fun. Any person who is a fan of the Sherlock Holmes stories definitely deserves to have this game!

Note: This game is currently out of print, but is available used through online sources.